Rate This Game
When submitting my score I agree that my IP will be stored to prevent abuse
Enjoy Free Sweepstakes Everyday - US Players Accepted
New Player Welcome Bonus
$2.50 in Premium Funzpoints at Sign Up

Most Popular Slots in NJ

“Your odyssey begins,” intones a grave-sounding narrator at the start of the Treasures of Troy slot from IGT.

It may well end up being an expensive trek at that.

Based on the legend of Troy — the city that withstood a siege for 10 years before being undone by accepting a horse-shaped gift from the gods — this 5×4, 1024-ways-to-win slot allows players to wager less money by having fewer lines available on every spin.

Let’s take a closer look at how the Treasures of Troy slot stands up to inspection.

As we have already mentioned, you can select how many paylines you want in play.

The reels see the usual playing card low symbols, and the higher paying symbols are characters from the Trojan War, such as Helen of Troy. 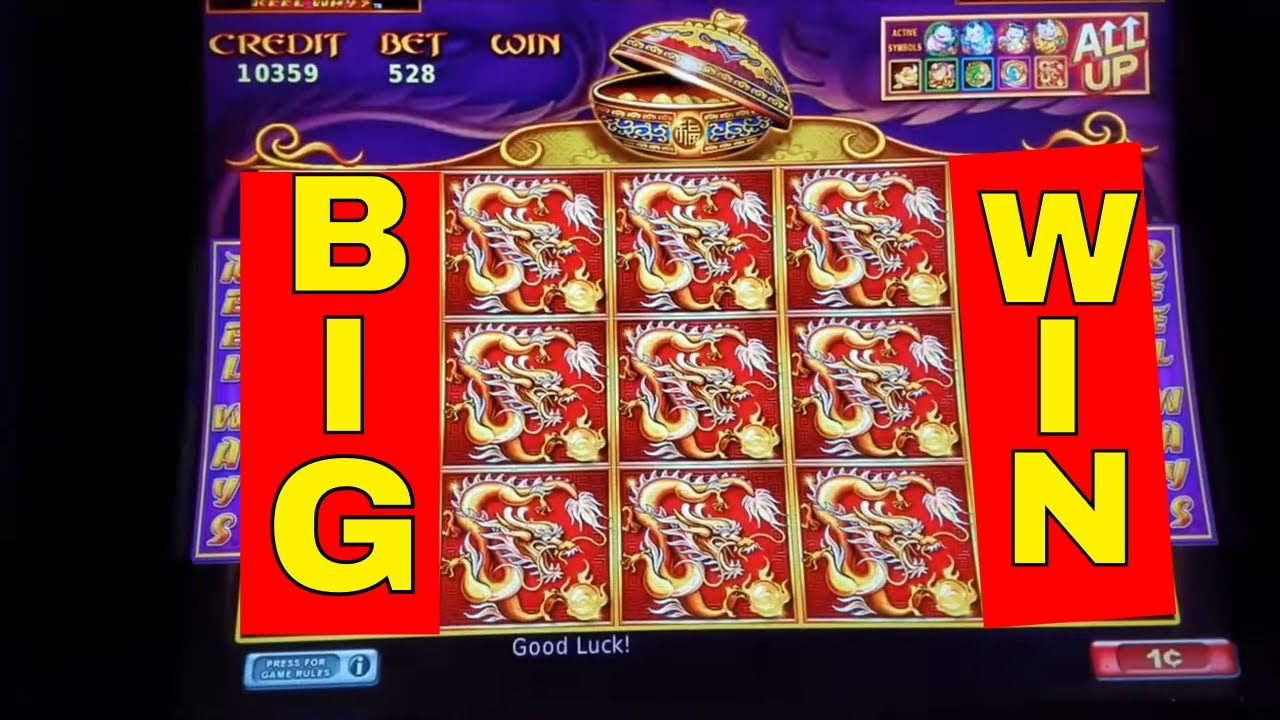 The Treasures of Troy is the in-game wild symbol and the wooden horse is the scatter; however, this only appears on reel three and you need to land two, three, or four on the third reel to trigger 10, 15, or 20 free spins respectively.

Who will the Treasures of Troy slot appeal to?

Ancient mythology and history provide a rich well of inspiration to slot manufacturers, and slot fans lap up these games. So any fan of online slots in NJ that involve ancient Greece and the like will certainly enjoy what the Treasures of Troy slot has to offer.

Players who value flexible wagering will also like this slot.

I would say that depending on the number of paylines, it can be a medium variance to high variance game, so players who enjoy bigger rewards less often will also find plenty of entertainment here.

Where to play Treasures of Troy in New Jersey

Given the extreme popularity of slot games themed in the ancient style, it should come as no surprise that Treasures of Troy is a game that is widely available in the legal NJ online casino market.

It is offered at VirginCasino.com and its sister site Tropicana Casino.

NJ players can also head to Golden Nugget, Betfair, Caesars, Borgata Casino, and Resorts to try out this title.

Once you have decided whether you want to play with a set number of paylines or 1024 ways to win, then the slot begins in earnest.

One thing to note: Playing with paylines does tend to pay out more per win than the 1024 ways, although you will win more often with 1024 ways in operation.

In addition, you need at least four symbols to earn a multi-way win, while on a payline wins are triggered with just three symbols in play.

The first nice touch is when you click the spin button and the reels spin to the accompaniment of an ethereal harp. The game then plays per your choice of multi-way or payline wins being triggered occasionally.

One of the easiest ways to land a payline win is to hit the Treasures of Troy wild symbol across the reels as frequently as possible on a single spin.

When this happens, you can hit some of the bigger base game wins. Most often, though, you’ll land just a single wild and that may help you trigger a payline win.

A word of caution here: When you are playing 1024 ways to win, this slot is a rather high variance game. Base game wins are not frequent and tend to be relatively small.

And when you are paying a high premium in terms of coin value for each spin, that can eat into your bankroll very quickly.

Alas, during payline play, the value of the base game wins – while not as frequent – does tend to be a little higher and each spin costs a bit less.

It is very much a “swings and roundabouts” situation here. Players should spend time trialling the game using their favored setups to decide whether paylines or ways to win is the best option for them.

The best value wins come in the free spins section and this is triggered in an unusual way, by landing two or more of the wooden horse symbols on the middle reel.

You can earn 10, 15, or 20 free spins in this fashion by landing two, three, or four symbols on that middle reel in a single spin.

This then takes you to the free spins game, which sees a new set of reels used as you have “breached the walls of Troy,” as the voiceover informs you. Watch out here for the wooden horse appearing on the middle reels again, as if you can land two or more, you can re-trigger free spins up to a maximum of 130 free spins.

Wins seem to come a lot easier (and there are more wilds on the reels) during the free spins round, which helps you to earn a decent-sized win. If you can re-trigger free spins a few times then you can really rack up a healthy win.

Play as a payline or ways-to-win slot

One of the best and most unique features of the Treasures of Troy slot is the ability to select how you want to play, either with one, 10, 20 or 40 paylines, or 1024 ways to win.

While slot wisdom suggests 1024 is the most profitable form of the slot, I’ve found playing 40 paylines is the better value option.

The key to the bigger wins is unlocking the free spins round and ideally re-triggering from within it. You do this by landing two or more of the Trojan Horse scatter symbols.

Scatter on center reel only

Unlike other slots, in Treasures of Troy, the wooden horse scatter is only on the center reel, which means any scatters triggered must be landed on that reel alone.

In a nutshell, you are unlikely to ever make your money back from base game wins alone, so to make Treasures of Troy a profitable experience you need to hit free spins.

I’ve regularly won back 30 to 50 times my total bet in this round.

Although I had reservations about the scatter symbols only being available on the center reel, I found that it didn’t make hitting free spins unduly hard.

After awhile I came to like the doorbell-sound “clang!” that accompanies the wooden horse landing on that reel.

Although the voiceover does sound a little corny after awhile, I’m rather fond of the grave-sounding intonations at various points in the game. Add to that a stirring drum-laden soundtrack and you have a nice ambient background.

The lack of multipliers in both the base game (a multiplier on a wild win would have lifted this game immensely) and also in the free spins round doesn’t help the game.

Base game wins are generally small unless you can hit a couple of wild symbols alongside some of the higher value symbols. Then these payouts, which are very rare, approach a decent amount.

Having played the slot both as a payline game and the 1024 ways, I have enjoyed more success and more profitable playing on the 40 payline option.

That’s not what slot experts would expect, as usually the more ways to win, the better. The 1024 ways to win should offer better value, but it doesn’t seem that way. 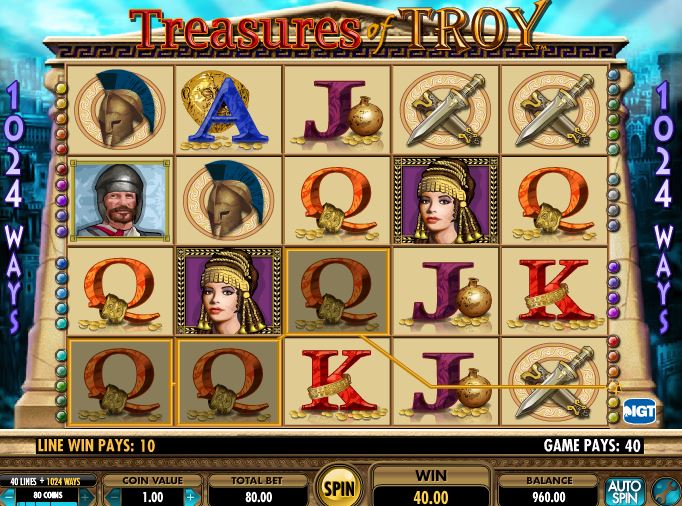 I’ve only given half marks for this, because although the soundtrack is stirring and the voiceover does guide you through the game nicely, the actual on-screen graphics are a little underwhelming.

With a lack of animations throughout, the game looks a tad bit dated.

Although essentially this is a free spins slot, there are some thoughtful touches, such as selecting paylines or ways to win, the scatter only being on the center reel, and innovative use of a narrator in the slot.

As such, I’ve given this slightly above average when it comes to innovation.

This score is an “averaged” out score. In the 1024 ways setup, I would rate the value would be as 1/5 as I felt it was too costly.

But when playing 40 paylines, I felt the value was more a 3/5 score as I won more often, won bigger amounts, and also triggered free spins more often. Hence the 2/5 average.

The jackpot on the Treasures of Troy slot is around 1000 times your payline bet, so it isn’t a massive jackpot.

If you wager more per line and play on the paylines option, though, you can win much bigger payline awards.

This is an enjoyable slot with some pleasing features, but it is highly variable when it comes to payouts.

If you play it at the 1024 ways option and it plays tight, Troy will have more of your treasure than you will have its.

Treasures of Troy is a slot to which you should give careful thought as to how you want to play. For me, during the review process, playing 40 paylines was by far more profitable, even if that runs counter to accepted slot logic.

Reno casino restaurants reopening today. However you choose to play, this is a higher variance game and hitting free spins is a must if you are to land a profit.

If you’re enchanted by times gone by, see our reviews of other ancient-themed games: Cleopatra, Spartacus Gladiator of Rome, and Treasures of the Pyramids.