By Anonymous
Picture 44 electronic player terminals spread out in a stadium-configured arrangement in a casino. A live blackjack dealer stands in front of the stadium facing the players. Players (in this example, up to all 44) make their bets by touching the casino chips across the bottom of the screen on their interactive terminal. As soon as bets are made by the active players and a countdown timer reaches zero indicating that wagering is closed, a live dealer deals a single (common) hand of blackjack to all players, and deals one card to herself.
All of the players independently decide how they are going to play the same starting hand. After all the players have made their playing decisions, the dealer is prompted to deal another card and place it in the Community Location on the layout. As players stand or bust, the dealer’s hand is completed for their individual game screen as a result of each player’s decision. This means if one player stands, it may send the subsequent Community Cards to the dealer’s hand, while another player might hit and receive those cards toward his or her total, delaying when their dealer hand receives further cards. At the end of the round, once all players’ results are complete, the “Pays and Takes” are done automatically by the system, and a new round of betting opens.
If you think the above electronic blackjack game is something in the future gamblingyou are wrong. The name of this new game is Fusion Hybrid Stadium Blackjack, and it has already been installed in several casinos in the U.S., including Venetian/Palazzo in Las Vegas, Mohegan Sun in Connecticut, Parx and Sands in Pennsylvania, and both Cache Creek and Barona in California. The Stadium Blackjack game is just one of several games available in the Fusion Hybrid system being marketed by Scientific Games Corporation. (Other games on the system include Baccarat, Roulette, Sic Bo, and, coming very soon, Stadium Casino War).
To get the lowdown on this new high-tech way to play blackjack, I visited the Stadium Blackjack installation at the Venetian/Palazzo casino in Las Vegas and also visited with Mr. Gabriel Baron, General Manager and Senior Director of ETS Product Management at the Scientific Games offices in Las Vegas. The way the game is played is as follows:
Players take a seat at any terminal. After they deposit their money (it shows up as credits on the bottom of the screen), they can decide how much to bet by touching or dragging the casino chips from the bottom of their screen onto the main betting spot, as well as onto the optional side bets available — Royal Match 21, Bet the Set 21, and King’s Bounty.
A single hand of blackjack is dealt by the live dealer along with a dealer’s up card. Each player uses the touch-screen buttons to indicate how to play blackjack with that specific hand (i.e., stand, hit, split, or double down; some casinos also give players the option to surrender). Some players may decide to hit; others might stand, or perhaps split or double down; essentially, each player can “do his or her own thing.”
Community cards are dealt by the dealer, and these cards are used to complete hands for the players (who hit, double down, or split), and for the dealer’s hand against each player, as appropriate. After all the hands are reconciled against the dealer’s hand for their situation, the system automatically “collects” losing bets and “pays” winning bets. (Below is a copy of the Stadium Blackjack Rules of Play provided by Scientific Games.)

Stadium Blackjack is a variation of a blackjack game wherein each player places a wager on their own player terminal, and the results of the game are determined by a live dealer utilizing community cards to reconcile player decisions.

What makes Stadium Blackjack unique is that all the active players start with the same starting hand against the same dealer’s up card, yet, because of the way the community cards are distributed to complete the players’ and dealer’s hands based on the playing decisions made by each player, at the end of a round each player could have a different final hand against a different final dealer’s hand and a different outcome. For example, suppose the live dealer deals a pair of 8s for the Player’s Hand and a 10 up card for the Dealer’s Hand. For simplicity, I’ll assume three active players and each player decides to play his or her hand differently. The following table summarizes how the system would distribute the Community Cards dealt by the dealer for Players B and C (Player A stood), and for the Dealer’s Hands for A, B, and C.
Based on the playing decisions made by each player:

The advantages of Stadium Blackjack for casinos are: Some advantages for players include: 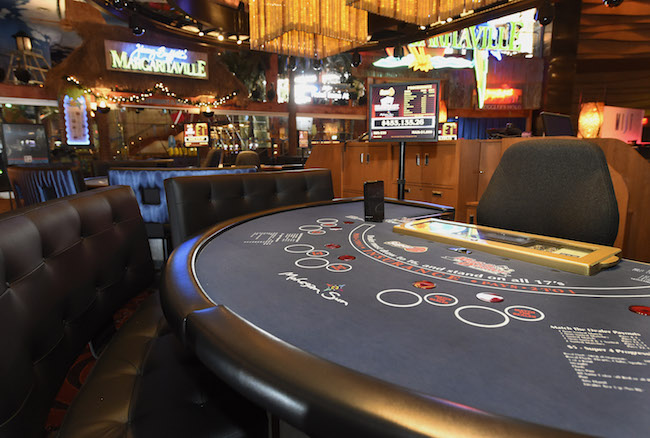 There are some pitfalls to Stadium Blackjack. They include a winning blackjack hand being paid at only 6-5 (but this is configurable; this was the case at Venetian whereas at some other casinos it pays the usual 3-2); the hands are played rapidly, meaning more hands are dealt per hour resulting in a higher hourly theoretical loss for players; and card counting is eliminated because the discards from each round are placed back into the continuous shuffler.
In addition, there are two rules for Stadium Blackjack that you should be aware of: If you happen to be at one of the casinos that offer Stadium Blackjack, take a look-see at this hi-tech game because this might be how blackjack will be played in the near future in all casinos.
TIP: If you are going to play Stadium Blackjack for fun, I strongly recommend you bring a basic strategy card with you when you play and refer to it so that you will always be making the correct playing decision. But be careful because the system has a timer and you typically have only 10 seconds to make a playing decision and hit the appropriate decision button (Hit, Split Double, etc.); otherwise, in most instances, it will automatically Stand on your hand unless you total 11 or less.
Note: I’d like to thank Mr. Baron for patiently taking the time to explain Stadium Blackjack to me, and for providing information for this article.
Henry Tamburin is a well-known blackjack expert and writer. He is also the author of the Ultimate Blackjack Strategy Guide.
Pman19
Hello to everyone. First post but probably fourth visit here .
I am using the wizard’s 4-8 decks, dealer stands on soft 17 color coded chart when I play. I’ve played about ten sessions of stadium blackjack here in western PA now - and I’m hooked. I’ve had 8 winning sessions and 2 losing sessions of varying times and money. ( I haven’t tracked exactly but that’s my best guess). I have played for as little as an hour and as many as five hours in a session.
I love the three handed stadium blackjack with live dealer interactions in front of us. I started out playing $5 on each hand so $15 per round I guess you’d say. I’m wondering what the bankroll would need to be?
I used $200 and that seems to be a good number that’s worked. I think $400 would be good for $10. And $800 for $20 etc.. I know it’s small sample size but so far seems ok.
I’d love to hear if I’m thinking about this correctly or do I have some unexpected surprises coming my way?
(It does pay 3/2 for BJ and seems to be on the positive side for many of the details that I’ve read about. Splitting is only once, I can surrender, double, double after split, not sure what else, etc. ). Thanks in Advance.
BleedingChipsSlowly
Thanks for this post from:
Hello Pman19, and welcome to the forum. It's great to hear you have taken the time to learn the best strategy for the blackjack game you play. I assume you have seen on the Wizard of Odds site that you do not have a winning edge for the game. You have been lucky, and I hope that continues. With luck (aka variance) on your side it can seem like you have found the goose that lays golden eggs.
You have not. The house has the edge and therefore the advantage. There is no betting strategy nor session timing that will overcome that advantage long term. That is why casinos stay in business. Think of your planing as entertainment. Keep your job. Risk only the time and money you can afford.
10 sessions is a wee, small, tiny sample size. You would need thousands to get a significant statistical figure. Continue to have fun. If you read through the posts on this forum you will find that it is possible to make money at blackjack. But to do so takes hard, grinding work for many more hours that a standard job. And it ain't gonna happen for anyone by playing stadium blackjack. Sorry! (My time at blackjack tables ended when stadium blackjack replaced low limit tables.)
“You don’t bring a bone saw to a negotiation.” - Robert Jordan, former U.S. ambassador to Saudi Arabia
tyler498
Thanks for this post from:

Hey Pman19,
Agree, with the previous answer. If I may add, you are lucky as you are in one of the best places (the best in my opinion) to play blackjack. PA rules mean all casinos offer the same good games.
It's great that you got some good variance on your side, but that should also warn you on how big the swings in blackjack can be, 8 winning sessions out of 10 is common, and don't be surprised if you get 10 losing sessions in a row at some point, because that is common too.
If you plan to play often, keep your gambling money separate from the rest of your life.
The average cost of playing basic strategy low stakes blackjack in PA is very low. 100 hph * 15$/hand * -0.36% HE = 5$ per hour . Which is cheaper than a bar or a movie theater.
The problem sometimes comes with money management and swings. After winning a few times in a row, some players take that as earned easy money, and it goes as easily as it comes (Generous tips to dealers, waitresses, making it rain at a strip club and whatnot) and then, losses are just hard cold losses, no rebate on those. That behaviour, in my opinion, introduces more costs to your new hobby than the house edge. So keep track, and keep it separate! Then if you're actually up in the long run, tip away!
If you really enjoy it, my advice is to get some basic card counting skills to at least protect yourself and not play at a disadvantage. I wouldn't recommend you actually do this professionally, and keep chasing EV. There are better ways you can earn money. But if you are going to play anyway, then count the cards and use a low spread. You can then have fun for free, and keep a sharp mind.
Best place to start would be Romes A to Z articles
Cheers