One key and distinctive feature of Qt framework is the use of signals and slots to connect widgets and related actions. But as powerful the feature is, it may look compelling to a lot of developers not used to such a model, and it may take some time at the beginning to get used to understand how to use signals and slots properly. Qt provides thread support in the form of platform-independent threading classes, a thread-safe way of posting events, and signal-slot connections across threads. This makes it easy to develop portable multithreaded Qt applications and take advantage of multiprocessor machines. Home Articles Programming C/C. You are doing the signal and slot across thread. Signal is sent from MyThread and Slot is main thread. Is there even main event loop started before you start your service thread? I suspect that you may not be starting the event loop where the mainObject exist. Hence you are hitting the issue. Signals and slots are loosely coupled: A class which emits a signal neither knows nor cares which slots receive the signal. Qt's signals and slots mechanism ensures that if you connect a signal to a slot, the slot will be called with the signal's parameters at the right time. Signals and slots can take any number of arguments of any type.

This page was used to describe the new signal and slot syntax during its development. The feature is now released with Qt 5.

Note: This is in addition to the old string-based syntax which remains valid.

There are several ways to connect a signal in Qt 5. 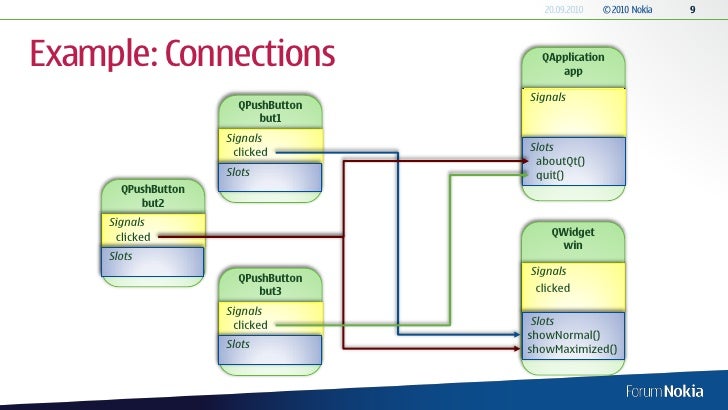 The new syntax can even connect to functions, not just QObjects:

As you might expect, there are some changes in how connections can be terminated in Qt 5, too.

You can disconnect in the old way (using SIGNAL, SLOT) but only if

Symetric to the function pointer one

Only works if you connected with the symmetric call, with function pointers (Or you can also use 0 for wild card)In particular, does not work with static function, functors or lambda functions. Ryan's poker table #4.

Works in all cases, including lambda functions or functors.

With C++11 it is possible to keep the code inline

Here's a QDialog without re-entering the eventloop, and keeping the code where it belongs:

The old method allows you to connect that slot to a signal that does not have arguments.But I cannot know with template code if a function has default arguments or not.So this feature is disabled.

There was an implementation that falls back to the old method if there are more arguments in the slot than in the signal.This however is quite inconsistent, since the old method does not perform type-checking or type conversion. It was removed from the patch that has been merged.

As you might see in the example above, connecting to QAbstractSocket::error is not really beautiful since error has an overload, and taking the address of an overloaded function requires explicit casting, e.g. Ameristar casino st louis buffet. a connection that previously was made as follows:

cannot be simply converted to:

..because QSpinBox has two signals named valueChanged() with different arguments. Instead, the new code needs to be:

Some macro could help (with C++11 or typeof extensions). A template based solution was introduced in Qt 5.7: qOverload

… but we have been adding overloads in past minor releases of Qt because taking the address of a function was not a use case we support. But now this would be impossible without breaking the source compatibility.

Should QMetaObject::Connection have a disconnect() function?

The other problem is that there is no automatic disconnection for some object in the closure if we use the syntax that takes a closure.One could add a list of objects in the disconnection, or a new function like QMetaObject::Connection::require

Function such as QHostInfo::lookupHost or QTimer::singleShot or QFileDialog::open take a QObject receiver and char* slot.This does not work for the new method.If one wants to do callback C++ way, one should use std::functionBut we cannot use STL types in our ABI, so a QFunction should be done to copy std::function.In any case, this is irrelevant for QObject connections.