QThread inherits QObject. It emits signals to indicate that the thread started or finished executing, and provides a few slots as well.

More interesting is that QObjects can be used in multiple threads, emit signals that invoke slots in other threads, and post events to objects that 'live' in other threads. This is possible because each thread is allowed to have its own event loop.

QObject is reentrant. Most of its non-GUI subclasses, such as QTimer, QTcpSocket, QUdpSocket and QProcess, are also reentrant, making it possible to use these classes from multiple threads simultaneously. Note that these classes are designed to be created and used from within a single thread; creating an object in one thread and calling its functions from another thread is not guaranteed to work. There are three constraints to be aware of:

Although QObject is reentrant, the GUI classes, notably QWidget and all its subclasses, are not reentrant. They can only be used from the main thread. As noted earlier, QCoreApplication::exec() must also be called from that thread.

In practice, the impossibility of using GUI classes in other threads than the main thread can easily be worked around by putting time-consuming operations in a separate worker thread and displaying the results on screen in the main thread when the worker thread is finished. This is the approach used for implementing the Mandelbrot Example and the Blocking Fortune Client Example.

In general, creating QObjects before the QApplication is not supported and can lead to weird crashes on exit, depending on the platform. This means static instances of QObject are also not supported. A properly structured single or multi-threaded application should make the QApplication be the first created, and last destroyed QObject.

An event loop in a thread makes it possible for the thread to use certain non-GUI Qt classes that require the presence of an event loop (such as QTimer, QTcpSocket, and QProcess). It also makes it possible to connect signals from any threads to slots of a specific thread. This is explained in more detail in the Signals and Slots Across Threads section below.

Harrah's southern california casino hosts. A QObject instance is said to live in the thread in which it is created. Events to that object are dispatched by that thread's event loop. The thread in which a QObject lives is available using QObject::thread(). 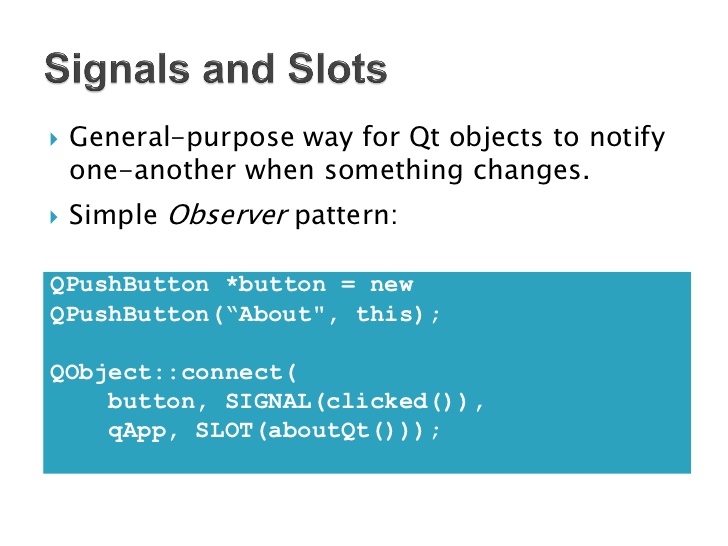 The QObject::moveToThread() function changes the thread affinity for an object and its children (the object cannot be moved if it has a parent).

Calling delete on a QObject from a thread other than the one that owns the object (or accessing the object in other ways) is unsafe, unless you guarantee that the object isn't processing events at that moment. Use QObject::deleteLater() instead, and a DeferredDelete event will be posted, which the event loop of the object's thread will eventually pick up. By default, the thread that owns a QObject is the thread that creates the QObject, but not after QObject::moveToThread() has been called.

If no event loop is running, events won't be delivered to the object. For example, if you create a QTimer object in a thread but never call exec(), the QTimer will never emit its timeout() signal. Calling deleteLater() won't work either. (These restrictions apply to the main thread as well.)

You can manually post events to any object in any thread at any time using the thread-safe function QCoreApplication::postEvent(). The events will automatically be dispatched by the event loop of the thread where the object was created.

Event filters are supported in all threads, with the restriction that the monitoring object must live in the same thread as the monitored object. Similarly, QCoreApplication::sendEvent() (unlike postEvent()) can only be used to dispatch events to objects living in the thread from which the function is called.

Accessing QObject Subclasses from Other Threads

QObject and all of its subclasses are not thread-safe. This includes the entire event delivery system. It is important to keep in mind that the event loop may be delivering events to your QObject subclass while you are accessing the object from another thread.

If you are calling a function on an QObject subclass that doesn't live in the current thread and the object might receive events, you must protect all access to your QObject subclass's internal data with a mutex; otherwise, you may experience crashes or other undesired behavior.

Like other objects, QThread objects live in the thread where the object was created -- not in the thread that is created when QThread::run() is called. It is generally unsafe to provide slots in your QThread subclass, unless you protect the member variables with a mutex.

On the other hand, you can safely emit signals from your QThread::run() implementation, because signal emission is thread-safe.

Signals and Slots Across Threads

The connection type can be specified by passing an additional argument to connect(). Be aware that using direct connections when the sender and receiver live in different threads is unsafe if an event loop is running in the receiver's thread, for the same reason that calling any function on an object living in another thread is unsafe.

QObject::connect() itself is thread-safe.