Frederiksborg Castle is home to the vast Museum of National History (Det Nationalhistoriske Museum). The rooms of this former royal palace are filled with portraits, history paintings, furniture, and decorative art covering the past 500 years of Danish history. The beautiful location of the castle on three islands in a small lake, the formal Baroque gardens, and informal English landscape park are further attractions. Frederiksborg is justifiably one of the most popular day-trip destinations from Copenhagen and easy to get to by car, public transportation, or day-trip excursion tour. 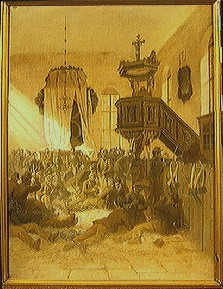 Frederiksborg Slot is the largest Renaissance castle in Northern Europe. The castle complex is spread over three islands in a small lake with large Baroque and landscaped gardens on the mainland. Inevitably, it is also referred to as the Danish or Scandinavian Versailles.

Like so many monumental buildings in Copenhagen, Frederiksborg Slot was the work of King Christian IV (usually abbreviated to C4 on building facades). He had the manor house, where he was born in 1577, replaced by this massive red brick castle complex in the Dutch Renaissance style during the first two decades of the 17th century. It is quite similar in style to the Rosenborg Castle in Copenhagen that houses the Danish crown jewels.

Frederiksborg Castle was often used as a royal residence during the 17th century but then fell mostly in disuse except for the crowning of Danish kings between 1671 and 1840.

In the 1850s, King Frederik VII again favored the castle as residence but a fire broke out in a newly installed fireplace, which led to the palace largely being destroyed in 1859. The palace was rebuilt and since 1878 used as the Danish National History Museum.

Visitors approach the palace via a set of gates and courtyards with drawbridges giving access to the various islands. On the second island, facing the main palace is an 1888-copy of the Neptune Fountain by Adrian de Vries (1617). The original was taken by the Swedish as war bounty in 1659 and is now at the Drottningholm Palace outside Stockholm.

The Danish Museum of National History

The Museum of National History (Det Nationalhistoriske Museum) in Frederiksborg Castle depicts 500 years of Danish history through a rich collection of paintings, furniture and historical objects. It could better be described as a decorative art museum, as it does not really explain Danish history in the typical sense of wars, expansion, national disasters and what happened when. Aquarius gambling horoscope for today. For a more traditional approach see the National Museum in Copenhagen.

It would be easy to visit this interesting museum without gaining any real understanding of Danish history. Descriptions and information in the various rooms are very limited and mostly in the form of plastic sheets with very academic descriptions of the main paintings in the room without placing much of it in any context. The free audio guide is thus very useful to make more sense of at least some of the items.

Highlights in the Danish Museum of History

Visitors receive a floor plan of the castle and basically simply follow the room numbers to see the whole museum with items grouped in chronological order in five main display periods:

It is a bit of up and down floors of this interesting building with limited backtracking needed to follow the route through around 80 numbered rooms.

A highlight of a visit to Frederiksborg Castle is the magnificent Baroque chapel of 1617 that largely escaped the fire damage of 1859.

Visitors look down into the church from the upper level, which gives a close-up look at the original Baroque decorations and paintings. The chapel has several further important items:

During the period of absolute monarchy, the palace chapel was used from 1671 to 1840 to anoint the king of Denmark. The change to constitutional monarchy from 1848 also saw the ceremony changing to more regular coronations, which now take place in Copenhagen.

The Great Hall of Frederiksborg Castle

The Great Hall (Riddersalen) is above the chapel and was a glamorous ballroom. Like the church below, it is around 50 m long. It was destroyed in the fire of 1859 but rebuilt largely true to the original. The walls are hung with tapestries depicting the life of Christian IV and paintings of the royal family.

Paintings and Portraits in Frederiksborg Castle

The museum has a collection of more than 10,000 portrait paintings. Not all are on display but after a few rooms it does feel as if most are. Visitors without a particular interest in a specific person, period or artist may safely concentrate on the furniture and decorations, which were particularly lavish during the absolute monarchy period.

The large historicist paintings are far easier to enjoy. These depict important, or at least memorable, events in Danish history. Many were painted on order for the museum during the late 19th century but acquisitions continue until the present.

A few highlights worth noting:

The Museum of National History ticket prices are DKK75 for adults (DKK20 for children 6-15 years and DKK60 for students or senior citizens 60+). A family ticket is DKK150 for two adults and up to three children.

The ticket is valid all day and gives entrance to the palace building with the museum.

Admission to the courtyards and garden is free.

Information in the museum is very limited making it worth having an audio guide. Audio guides are free but with limited availability. It may be available as an iTunes download – free wifi at the museum entrance.

Many rooms are lit primarily by daylight making a bright day a better choice.

The Baroque garden is open daily from 10:00 to sunset (latest 21:00). The English landscape garden and walking / cycling path around the small lake are always open.

Getting to Frederiksborg Slot, 3400 Hillerød, tel. +45 48 24 09 66, www.dnm.dk, from Copenhagen, is easy by car or public transportation while excursion tours may also be booked from Copenhagen that often include further sights in the region, for example with Kronborg and a drive by Fredensborg, or for the more ambitious with the Viking Museum in Roskilde and Kronborg. Private tours are also available.

The castle is around a 40 minutes’ drive north of Copenhagen. Follow highway 16 towards Hillerød. Parking (usually requiring payment) is available in lots near the slot.

Frederiksborg castle is also easily reached by public transportation. Take S-train (S-Tog) line A to Hillerød station (around 40 minutes). It is a pleasant 15-minutes walk from the station to the castle. Alternatively, use bus 301 (direction Ullerød) or bus 302 (direction Sophienlund) to bus stop Frederiksborg Slot. The bus fare is usually included in the train ticket.

Do not confuse FrederiksbOrg Slot with FrederiksbErg Slot, which is a yellow palace in Copenhagen used as an officers’ school by the Danish Army. It is usually not open to tourists – the adjacent Copenhagen Zoo and Frederiksberg Park are fun but low on historical displays.

It is fairly easy to combine a visit to Frederiksborg Castle with seeing Helsingør with Hamlet’s castle by using public transportation or driving. (Drivers may also easily add Roskilde, which sometimes works on public transportation too without backtracking to Copenhagen.) Other top sights in the region include Fredensborg Palace – a royal residence only open in summer but the gardens are pleasant too – and Louisiana – a wonderful modern art museum overlooking the Øresund with views of Sweden. If unable to make it to Frederiksborg Slot, Rosenborg Castle in Copenhagen gives a fairly similar experience and includes the treasury with the Danish crown jewels.